As energy production moves further towards sustainable and de-carbonised generation, producers are increasingly attracted to the exploitation of unconventional energy resources. Unconventional typically refers to shale gas and the capture of geothermal energy.

TerraDat Landtech JV (Trading as Landtech Geophysics Ltd.) can assist with the exploration and assessment of a particular resource through a range of geophysical methods, most commonly seismic, magnetotellurics and gravity surveying. We use the latest technology available to ensure the Clients needs are met and provide a commercial service with a strong research backing in alliance with Bristol University (Earth Sciences).

Passive seismic surveys involve deploying a network of receivers for recording natural earthquakes and seismic signals associated with induced fracturing over an extended period. The surveys can produce 3D volumes showing the seismic velocity structure, Poisson’s ratio and natural microseismic distribution often needed for licensing and continued monitoring of the evolution of the reservoir. In addition, the surveys can provide 3D quality factor (Qp attenuation) volumes, which is a parameter that is highly sensitive to the properties of a geothermal reservoir. For conventional reservoirs (fracking, shale gas etc.) TerraDat Landtech JV deploys an advanced seismographic array comprising 32-bit recorders and 3-component borehole seismometers. Depending on the terrain, the system may be connected wirelessly via WiFly telemetry for real time collection to a local central unit. If required, the data can be sent through satellite telemetry to any location. The epicentre and magnitude of micro-seismic events are determined before, during, and after drilling operations, establishing robust baseline data and delivering constant monitoring as required. 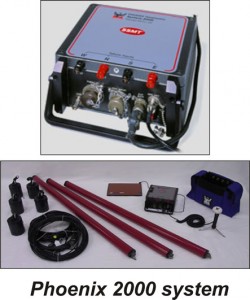 MT (magnetotellurics) is a method of imaging the subsurface by measuring electrical and magnetic fields caused by worldwide thunderstorm activity and changes in the ionosphere. The depth of investigation is primarily governed by the occupation time at each survey station. An achievable depth window is between about 300m down to ~10,000m. The method allows detection of resistivity anomalies associated with productive geothermal structures, such as faults, fissures and cap rocks, as well as potential estimation of geothermal reservoir temperatures.

Gravity surveys are an excellent tool for investigating bedrock structure and for modelling a potential reservoir. The method is sensitive to the density of different lithologies and the fluid content of their pore spaces. Surveys routinely form part of regional investigations and structural modelling for geothermal prospects. Where geothermal exploitation is underway, repeated gravity surveys allow monitoring of fluid migration.