TerraDat has developed a strategy for investigating slope stability that provides key engineering properties for the management and monitoring of existing and potential landslides. While each site is considered unique with respect to the survey design, the methods that most often prove to be favourable include seismic refraction, MASW, resistivity tomography and ground conductivity scanning. Primary targets for geophysics include compressional and shear strength of the rock and overlying sediments together with their relative clay and water composition. Poisson’s Ratio and a range of elastic moduli, i.e. Shear, Young’s and Bulk can be derived and presented in cross-section.

Extensive research has been carried out by TerraDat as part of on-going commercial projects in N.Europe and we recently funded a PhD studentship at Cardiff University studying landslides and their characterisation using geophysical methods. The findings and associated innovations have enhanced our approach to commercial investigations.

n earlier years, TerraDat formed part of the European funded PACE project concerning permafrost and the impact of climate change. In an alpine environment a common target is the extent and degradation of permafrost that underlies many high altitude structures. Research work was aimed at establishing the characteristic geophysical properties of permafrost and designing a survey strategy to best identify it at marginal sites at risk of change. The areas of investigation extended from Sierra Nevada in southern Spain through the Alps and as far north as Svalbard. 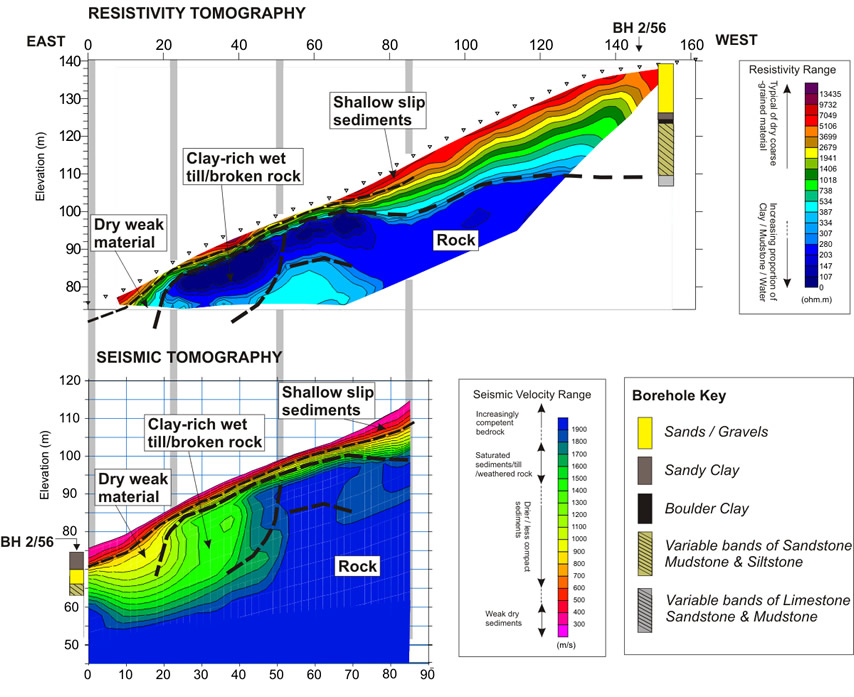