Crosshole Seismics typically involves shooting at regular depth intervals from one borehole to another and simply deriving velocity of the signal travelling between them. Given the measured velocities it is possible to derive elastic modulae for the material between the boreholes as it varies with depth. Carrying out a survey using compressional (P) waves and shear (S) waves enables derivation of Poisson’s ratio while the introduction of density information (from measurement or estimation) enables derivation of Bulk Modulus and Shear Modulus values.

Borehole Seismic Tomography typically involves shooting at discrete depth intervals in one borehole and measuring the velocity of signal travelling to multiple receivers at different depths in another borehole. Using this method, data are acquired along a great number of ray-paths between boreholes enabling derivation of a detailed image of the rock mass through tomographic inversion of the data. The method can be used to resolve features such as voids, large fracture zones and geological structure where contrasting lithologies are encountered. 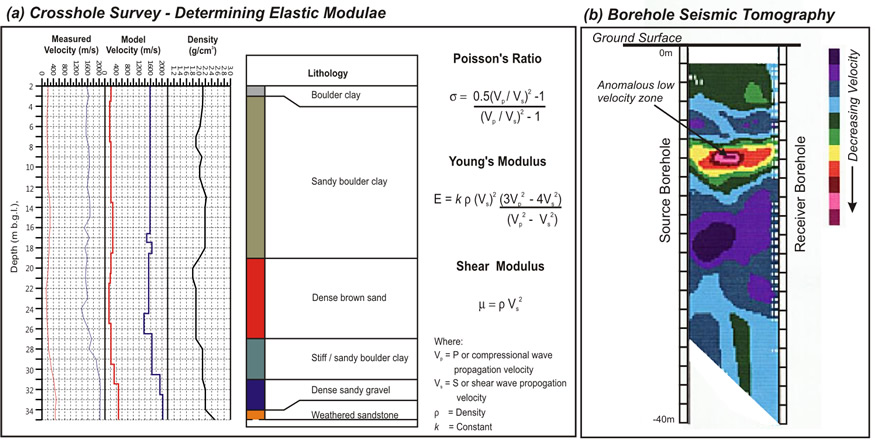 The dynamic elastic modulae of the rock mass between boreholes can be readily derived using Crosshole seismic methods. Density information is required for some modulae and may be estimated from known lithological properties, measured directly in the field/lab or derived from a borehole logging survey. (b) the identification of low velocity zones such as a cavity/solution feature, fracture zone or workings are common requirements of a seismic tomography surveys and are clearly observed on the resulting tomogram.