A TerraDat microgravity survey is based on measuring localised variations in the Earth’s gravitational field using an extremely sensitive gravity meter. We own and operate the latest Scintrex gravimeters.

The presence of an anomalously high (or low) density body in the subsurface causes a localised high (or low) anomaly in the measured gravitational field. The gravity effects described can be extremely small, however, modern instrumentation and exhaustive data processing techniques enable detection of both geological and artificial structures or voids. TerraDat also carries out regional gravity surveys targeting hydrocarbon traps or groundwater resources for local supply or geothermal energy.

The Scintrex gravity meters are semi-automated systems that enables statistical averaging and filtering of readings taken every second over a fixed period of time (typically 2-3 minutes). The elevation of the gravity instrument was recorded to a 1mm precision (<0.3cm error) at each survey station to facilitate accurate elevation correction. The results from the microgravity survey can be presented as a series of gravity profiles or colour contoured plot displaying the derived Bouguer Anomaly. Interpretation of the microgravity data is based on observing the shape, amplitude and wavelength of a particular anomaly and comparing it against the modelled gravity profile of a given target feature. In order to remove (reduce) background gravitational effects i.e. those that do not originate from the target feature, the following processing steps were applied to the acquired dataset using a combination of internal CG-5 software and TerraDat proprietary software GRED. Earth Tide, Temperature & Tilt Correction: Applied automatically by the gravity meter software. 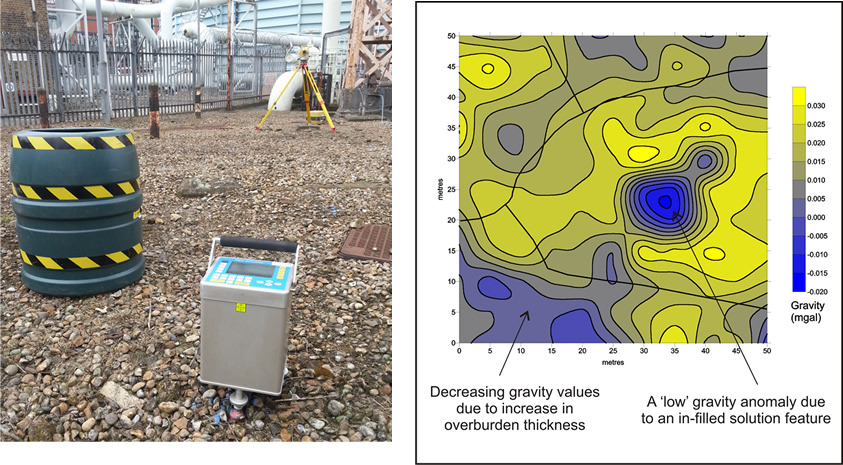 Un-modelled Temporal Residual Correction: Obtained by least-squares fitting of a quadratic polynomial through the base station readings for each day. It is our normal practice to set the Bouguer anomaly at the base to zero so that the calculated values for the other stations are relative to a base station zero.

Latitude Correction: Calculated on the basis of the site latitude. Typically, due to the small latitude extent of the survey gird the correction is assumed to be linear per metre north.

Free-air Correction: Applied to the dataset based on the instrument elevations, which were recorded to a 1mm precision (<0.3cm error) using an EDM survey system or …… recorded by network corrected GPS for regional scale surveys. Terrain Correction: Based on the measured ground level at each gravity reading station and selected points beyond the survey grid. Bouguer Correction: The selection of the reduction density is based on both site and geological consideration plus Nettleton’s method where appropriate.

The principal limitation on the use of gravity is the time required for careful acquisition and data processing. The detectability of a feature using the gravity methods is proportional to its size/depth ratio and its density contrast with the host material. There is a decrease in spatial resolution with increased depth of burial. In terms of site considerations, it is best to avoid sites with severe terrain or are have excessive vibrational noise. 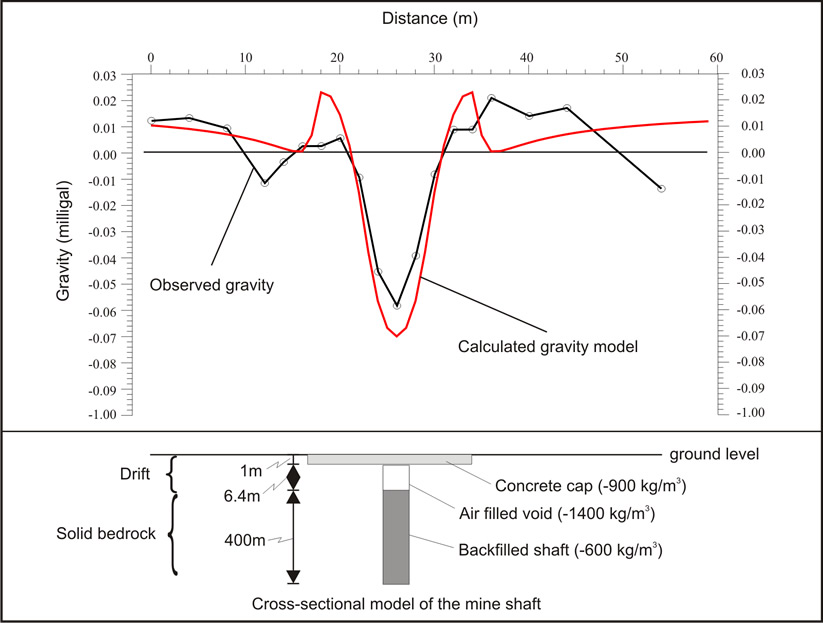 A microgravity survey was carried out to target solution features beneath a site prior to a housing development. The microgravity data was acquired on a 5 x 5m grid and reduced to a Bouguer anomaly plan.